In Execution Mode, teams are trying to win the most out of 12 rounds. To win a round the attacking team needs to eliminate all enemy players or bomb one of the objectives; for the defenders to win the round, they have to stop them. Once six rounds have been played, the teams swap.

Each match consists of, at most, 12 rounds. The match finishes once one team has won 7 rounds. If each team wins 6 rounds, it is declared a draw. Each round lasts for 2:00. A round is won if:

Unlike in regular game modes, not everyone can plant C4; just one bomb spawns, and only the player who has it can plant it. The bomb spawns at the beginning of each round on an attacking player, typically a higher-scorer or an engineer. If C4 is not planted at one of the bomb sites before the timer expires, the defending team wins the round. The C4 can only be planted once, and the other bomb site becomes disabled once it is planted.

Once killed, players do not respawn until the next round. Players that are incapacitated but not finished can still be revived or helped up to continue fighting.

The objective HUD is in the top left of the screen and shows: 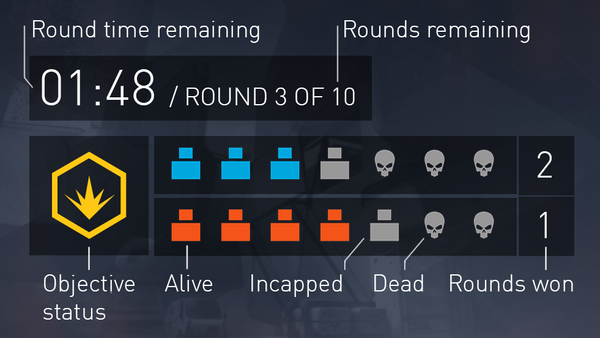