Another update, another batch of bugs being squashed! The second part of our Summer Squash season also includes key balance tweaks to even the score a little more.

We've got one more Summer Squash update to come, which will be heavily focused on optimization. Keep your eyes out for it in the coming weeks! 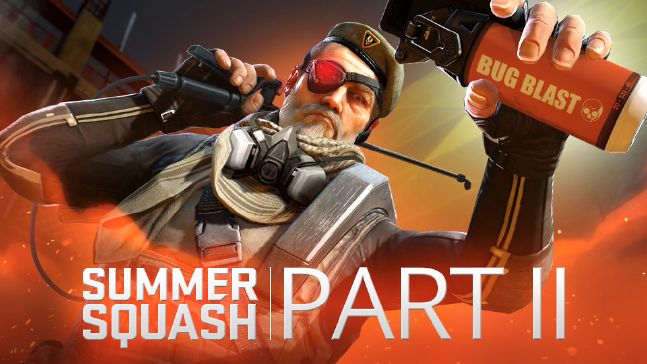 While Aimee is useful, she hasn't quite been keeping up with the other snipers. We believe part of this is due to the long cooldown of her SNITCH Device once it's destroyed.

We've reduced this cooldown so Aimee can deploy SNITCH's more regularly. In doing so we've also reduced the maximum life-span of the SNITCH to match, effectively making it 'one per spawnwave' when it comes to Stopwatch play.

In the right hands, Redeye has proven to be overly effective, especially when firing through Smoke, leaving his targets with little chance to fight back.

While this behavior is intended, we felt that Redeye could spend too much time in this state, so we've increased the cooldown cost of enabling IR Goggles. This not only reduces the total amount of time the IR Goggles can spend enabled, but also increases the cooldown penalty of constantly switching IR Goggles on and off.

To also provide a better counter to Redeye, we've also reduced the amount of explosive damage it takes to remove Smoke from an area, so now a single Frag Grenade will do the trick.

As the current top-dog Medic, Sawbonez needs marginally toning down. Since his healing is heavily based on quick-regeneration, we've reduced the instant 'Direct Hit' healing he provides with his Med Packs. This brings it in-line with the 'Direct Hit' bonus that Sparks' Med Packs provide.

The REVIVR Rifle makes Sparks a formidable reviver and the longest range Medic, however her reduced healing capacity means she's often not as effective as the others.

With that in mind, we've increased the amount of healing her Med Packs provide to others, while keeping the self-healing the same.

The Dreiss has been seen to be the least effective Assault Rifle when it's available. Since the main issue seems to be bullet spread when fired from the hip, we've significantly reduced initial bullet spread and toned down the maximum bullet spread after sustained fire.

The Timik-47 has been lagging slightly behind the M4. While it is intended to be harder to control, it should be initially more accurate. We've reduced the starting bullet spread a little more to emphasise this, while also toning down the vertical kick after each shot, to make it a little more viable when ironsighting.

While The PDP-70 has been seen to be very effective on Redeye due to his ability to hunker down and fire through smoke, it's not seeing nearly the same performance when in the hands of Aimee or Vassili.

With that in mind, alongside the changes to Redeye, we've opted to increase its potential burst damage with higher damage per shot, but lowering it's damage output over time.

This should reduce the effectiveness of spamming through Smoke, while leaving the weapon itself potent.

While it has good killing potential, the Grandeur SR requires a lot of control, often leaving the shooter as a stationary target. We decided to speed up the reload speed and make it more accurate when hip-fired to allow for a bit more mobility.

While being the most accurate SMG, the Hochfir has been struggling in the damage department. To counter this we've marginally increased the rate of fire to bring its time-to-kill closer to the other SMG's.

Compared to the semi-automatic Pistol secondaries, the MP 400 and especially the Empire-9 are both significantly over-performing.

The MP 400 is the slowest-firing, hardest-hitting of the Machine Pistols, so we've lowered the rate of fire a little more here to tone it down while further differentiating it from the others.

The Empire-9 is the fastest-firing Machine Pistol and intended to fill the air with low-damaging bullets. Currently it's vastly out performing all other secondaries so we've increased the maximum bullet spread and recoil, making it harder to control over time.

Both the Caulden and the Simeon .357 are under-performing when compared to other secondaries.

We've increased the number of rounds in the Caulden magazine, so it's closer to the other pistols in terms of damage-per-magazine and players will have to reload less often.

The Simeon is the weaker, and thus easier-to-handle of the two revolvers. We've reduced the kick to make it easier to for players to land those devastating head-shots.